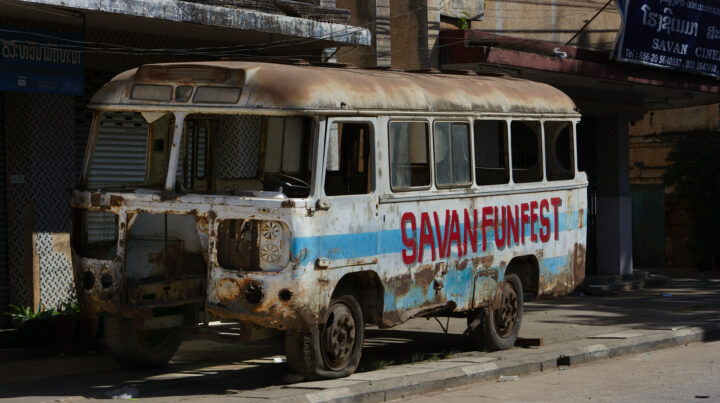 Savannakhet or known under it’s official name Kaysome Phomvihane is the second largest city in Laos. It is said to have 120.000 inhabitants. Even though it’s large it seems small and quiet.

I visited the town in January 2020, the dry season. We were told that it hadn’t rained since start of November and it was certainly dry. During the day temperatures was in the low 30’es Celsius, but as it was dry it was bearable.

The city offers a few sights in the town

So in the city you can take a stroll and have a look at the colonial houses, the temples, church and visit the museums – unless it’s week-end were they are closed. Which will entertain you a day or maybe day and a half.

To get around in the country site we contacted Marvelaos to provide us with a 2 day bike tour with home stay. We enjoyed the landscape, it’s quite easy to ride the bike on the country roads as there are almost no hills to climb. We spend the evening and night with a Laotian family in Phonsim village.

We had supper and breakfast with the family, they were surprised to see that we would eat the whole fresh chillies that was part of the vegetables for supper, they had never seen a foreigner do that.

Of course neither my wife or I speak any Laotian, but our guide stepped in as translator, so we got to know a bit about daily life in the village. For instance did we have an introduction to production of Lao Lao (The Laos version of moonshine) and of course we had it as a welcome drink.

The night is spent on a madras on the floor, luckily under mosquito net. You’ll go to bed early compared to us in the west, but it’s because the roosters start 1.5 – 2 hours before sun rise. In January that was 4:30 AM, I do not know about you, but it interrupts my sleep.