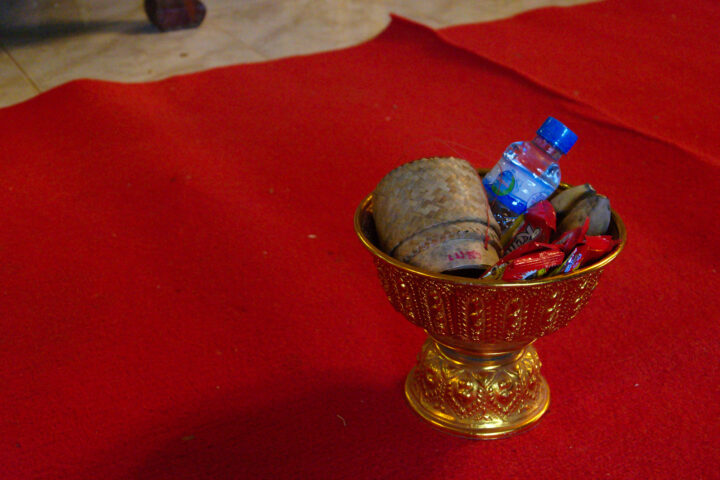 A year a go I woke up on a thin madras laid out on a tiled floor. It was pit dark, it was 4:30 AM and I was woken by the roosters in the village starting to crow, they new that the sun would rise within 1,5-2 hours. As you can imagine I was not in my comfortable bed in DK, I was in Phosim village in Laos near Savannakhet where I was visiting a Laos family. We had a guide with us because very few Laos village people speak English or European languages. After a short while I could understand from noises in the house that it was time to rise.

Shortly before sunrise (it was 6:31 AM and Laos is GMT +7) we were equipped with a bowl of food – not breakfast but donation to the monks in the local temple – and accompanied by the man in house and our guide to the local temple. In the temple we should be part of the days team of donates to the monks. When we arrived we should sit in front of the scene where the monk in charge was situated. The monk was occupied by talking into a microphone, and you could hear his talk transmitted through loudspeakers on the roof of the temple. I have heard temples in other places in SEA transmitting and near endless speech, not knowing the content or context. The monk is simply mentioning and individually thanking the donators for each item the temple has received since yesterday, for larger temples it can seem like an endless speech.

After 15-20 minutes the monk made a break in his appraisals. Everybody was requested to be seated on the tiled floor in a manner where your feet do not point forward, it’s very rude to point your foot soles towards someone in front of you. During his break we and the other attendees could provide our donations to the temple. To do so we needed to walk – on our knees – to the edge of the scene and hand over our donation bowl.

Our donation was boiled sticky rice, bottled water, candy bars, fruit and some small banknotes. Others donated similar gifts, especially boiled rice. 3 young monks where in charge of receiving the gifts, they emptied the donators bowls and placed donations in large bowls on the scene. The cooked rice was of course handled with bare hands, maybe hygiene around food is overrated. The cooked rice will be the backbone of the monks diet that day, it will most likely be consumed without reheating.

When every donation had been moved to the temples bowls the lead monk made a prayer or a blessing. The visit was over and we could return to the house for breakfast, rice and vegetables.

After the pagoda visit we enjoyed a little sight-seeing on Turtle lake (Nong Tao) where someone is working on fish farming. If you come near Phosim Village or That Ing Hang pagoda and are in need for a good cup of coffee or tea, then I can recommend Coffe one which is glass and steel western cafe in the middle of the rice paddies. The guy served good coffee and tea, and had a variety of cold drinks. And a peculiar experience to sit in a western style cafe with a view to the rice paddies.