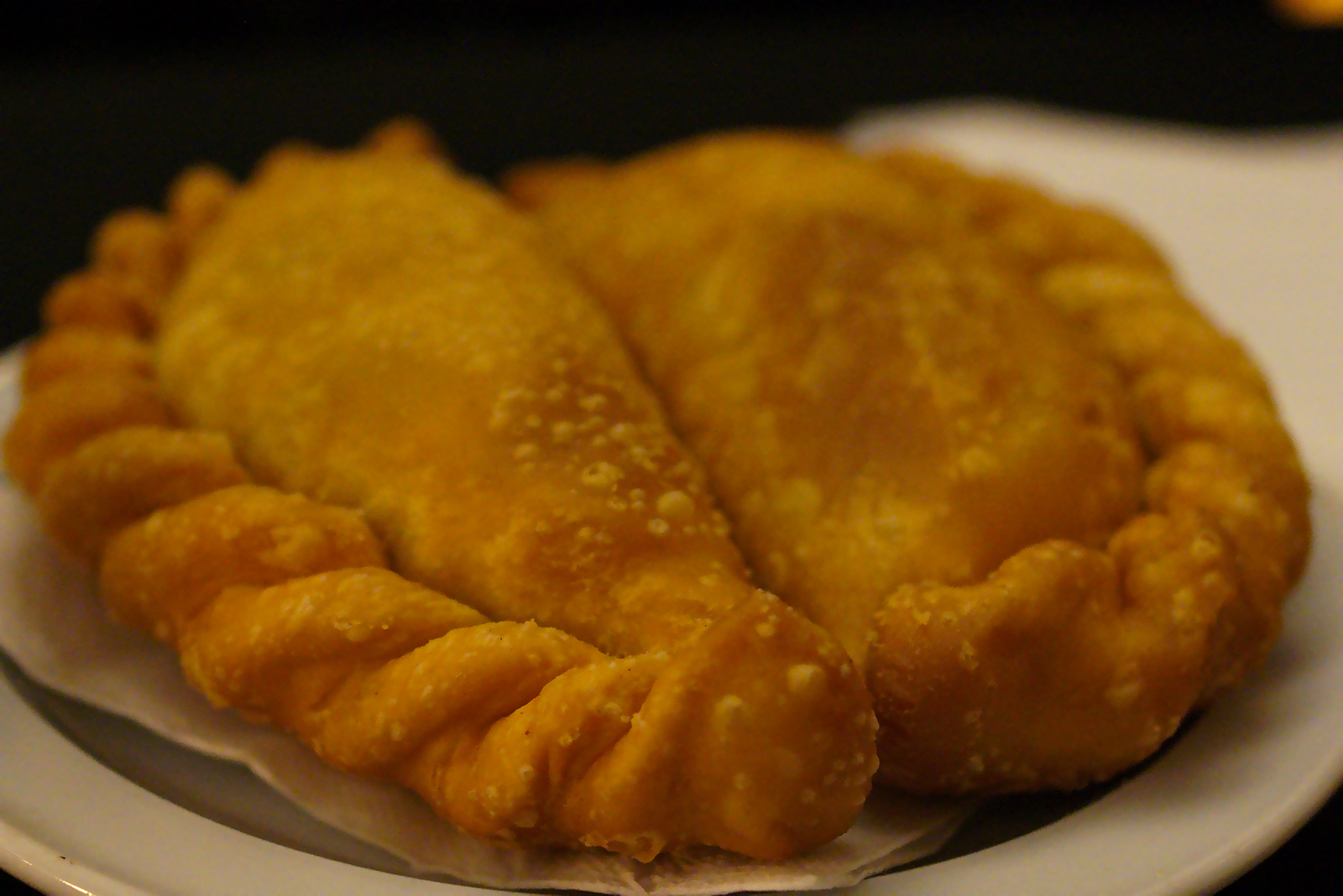 Argentinean food is influenced from both the courses and habits brought to the country by immigrants and by the native population and the resources of the land.

Italians was a large portion of the immigrants during 19th and 20th century and by so they have influenced the Argentinean cuisine by bringing pizza, pasta and ice cream. Like every other place in South and Middle America you meet the empanada which is the most widespread local course. Resources of the land have contributed with especially ox meat. In the north western parts you will also find use of corn and quinoa.

In other part of the world I have found that all restaurants has both fish and vegetarian dishes on the menu, but in Argentina I have meet many (perhaps most) restaurants that do not have neither a vegetarian or fish dish on the menu. Even if they have salads, these will include ham or chicken.

The famous Argentinean steak is almost a mandatory component on a restaurant menu. Steaks are typically served without garniture. Another big item is the Milanesa, which is a fillet in breading. The Milanesa can be found with in variations which are likely to increase the size of the serving. E.g. the Milanesa-Napolitanian as my wife unprepared ordered for dinner one night. She got a large Milanesa, topped with a heavy layer of grated and melted cheese, on top of the cheese thick slices of tomatoes to finish large and thick slices of ham. This was accompanied with French fries (patatas fritas). The dish would have fed 2 or 3 a normal meal size.

For a vegetarian traveling in Argentina can be cumbersome. But many restaurants can provide salads; the named salads will include ham, chicken and/or cheese. These will also provide you with dressing, typically in generous amounts. Luckily many restaurants offer a mixed salad where you choose 3-6 ingredients from a list. The ingredients offered is typically salad, rucula, onion, carrot, leaf celery, tomatoes, cucumber, corn, beet root, olives, tuna, and of course ham, chicken and cheese. Salads will be accompanied by olive oil and vinegar.

Cheese is used in many dishes, but don’t expect the same taste from parmesan in Argentina as in Italy. The cheese called parmesan is not from the Parma area in Italy, but will produced locally. The local ‘parmesan’ is not a hard dry cheese it is more like an Edam cheese.

The empanadas will be served with filling of ham, chicken, pork, minced beef and combined with cheese. Some places you’ll find empanadas with only cheese and with vegetables. I have read that empanadas can be a desert as well, but I have not found them on menus.

Pizza came to Argentina with the Italian migrants, but I suspect that either the brought the wrong recipe or misunderstood it. The bottom is nice crisp on the underside, but it’s rolled out to thick to bake through. The cheese will not be a buffalo Mozzarella, but some grated unknown cheese spread in a thick layer. The oregano used is of good quality. So all in all you get a pizza tasting nice and fresh from the oregano, but on the other side it’s a greasy piece due to be drowned in melted cheese.

When I cook myself or when I eat out I like to taste new spices and enjoy spicy food. This has not been possible in Argentina. I have meet salt & pepper and for pizza oregano. The explanation is that the Argentineans do not like spicy food.

I enjoy seafood and fish, but this can be hard to find in Argentina. Along the rivers it should be the habit of the inhabitants to eat fish, but if so only a little of that is eaten on restaurants, because few has it on the menu. In the north east we found the pacu on the menu. The pacu is a vegetarian relative to the pirana. It is handled similar to the steaks; a fillet fried or grilled.

In Iguazu a restaurant served the pacu in a lightly spiced sauce with palm core, mushrooms and potatoes. It suited the fish very well.

Almost all restaurants do not present a finished menu as we know it in Western Europe. So when you order a fish, you’ll get a fish. Sauce, vegetables, rice potatoes to provide a full dish is side orders. But I think they do not expect you to order side orders, because amounts of the main item will be sufficient to feed you.

To eat out is usually in Argentina, so you’ll find many restaurants in all cities. But be aware of opening hours. Most restaurants will not open before 8 or 9 PM, and if you appear at 9 PM you are likely to be the first guest of the day. This means that the kitchen is not necessarily quite ready to server dinner and you’ll be waiting 30 or 45 minutes for the food. Argentineans show up from 9.30 and will continue to arrive till round midnight.

Tips are assumed to be added to the bill after you have settled the bill. 10% of the bill is the typical level for tips. You need cash to pay the tips, even if you settle the bill with your card.

Ice Cream seems to have migrated better from Italy than pizza. Most places I have had delicious ice creams, worked out in the traditional Italian way with deep taste. You will find the most common flavors from fruit and cakes. A special Argentinian flavor is added from the Dulce de Leche.