The roads in Argentina are not always a pleasant experience. Of course there are good roads, like the Ruta National #9 or also known as the Pan American Highway. But even the nine has it’s lesser pleasant places.

Narrow roads is to be expected, the RN9 runs between Salta and Jujuy in to versions, a new and an old. The old is 4 meters wide and on long streches through the mountains curve comes after curve.

Bumpiness can either be result of cracked tarmac or ordinary gravel.

Rain handling systems causes the road to be lowered on short distances, like 10 meters. This is caused by estabishment of some rock and concrete water passages, that allow water to pass over the road without undermining it. You need to reduce speed such places, unless you’ll break the under carrige and hit the roof when leaving.

So there is reason to beleive that an Argentine car lives a tougher life than it’s European counterpart. But eventhough you’ll find cars much older than in Europe. This is caused by currency and import restrictions and general poverty. 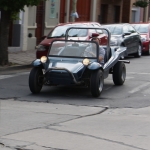 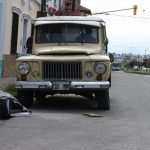 From travels in South East Asia it know that especially Toyota’s are long lived, but in Argentina the Japanese do not seem to be a large brand. Except for the never Toyota Hilux, that overtakes you on any mountain gravel road.

From rental companies your on the same path as in other parts of the world. Most provide quite new cars with god realyability.