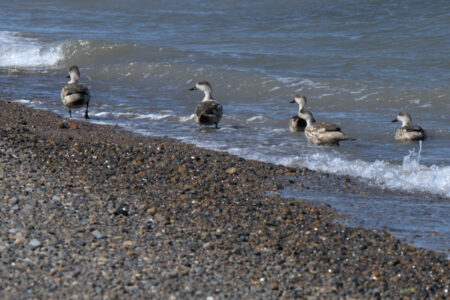 Birds are found every where, some are very similar all over the world. Think you can find the house sparrow at any place on the globe, but other species are specific to the local area. Visiting Peninsula Valdes has given me the opportunity to see birds that I’m not familiar with.

A new bird to me was the Southern Giant Petrel. A rather big bird that seems to be liberal about what to eat.

At fist glance i was convinced that i had spotted a Laurus Marinus or Great Black bag gull, but the Kelp gull living on the southern hemisphere looks very similar, but it is a different specie.

The Magellan Penguins are not found on the northern hemisphere, so I’m not that familiar with those. The colonies on Peninsula Valdes is about the furthest north the specie lives in the Atlantic ocean. On Peninsula Valdes it’s possible to get really close to the penguins, you could probably touch them if you wanted. Rumors say that some Argentinians steal penguins in the area, to keep them as pets. Just pick on up a put it in the trunk of the car. Likely to be possible as the bird only weighs in at 5-6 kilos.

At first glance it was just a common house sparrow, might bee that I first saw a female. But spotting the male with it’s fine red collar makes it a bit different from the common one, it’s a Rufus-collared sparrow.

Someone needs to clean up where several animals lives together, the Turkey Vulture takes care of the cleaning task in the area. You can often see them circling over the area using the up-winds from the hills. Often you’ll see them in small groups – 2-3-4 together.