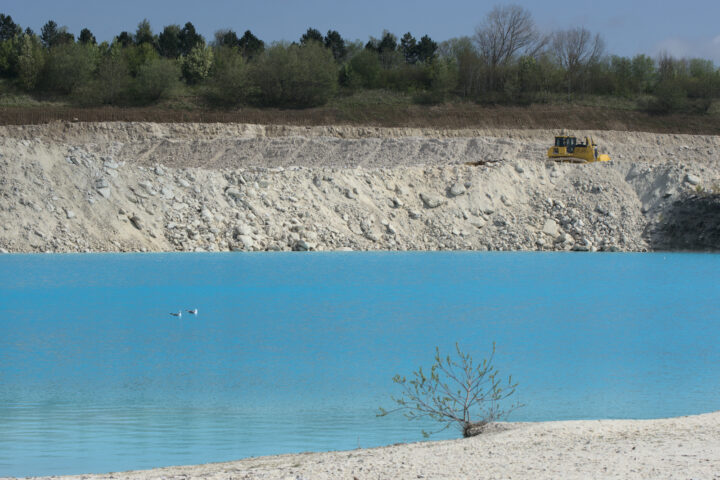 Almost 80 km from Copenhagen is a small town – Fakse (sometimes Faxe) – situated on top of a limestone quarry.

I’ll not state that the town itself is worth the 45 minutes drive from Copenhagen, it looks like any other small town. But as limestone quarries are very few in Denmark it seemed like a must-go-there-sometime item to me. So when the first week-end of May 2020 seemed to provide som fair weather and my wife and I thought that we have seen our home enough during Covid-19 lock-down we went on tour.

Geologist have traced the area 63 Mio years back in time. A time where it was under the sea and situated around northern Italy. The sea floor was covered with alges and later with corals, the remains of these creatures are what we today sees as limestone. You can find a brochure (in Danish) that tells the story of the areas and how to visit. More than 500 species of animals has been found in the limestone. You can bring a hammer and chisel to find you own fossil hidden inside the limestone.

The quarry has been in use since around year 1200. The excavated stone has been used as building materials, originally as limestone blocks but later as component in other materials and af fertiliser in agriculture production.

One remarkable building that is build from limestones from Fakse is the Marble Church in central Copenhagen. It was planned to be build with marble, but it turned out to be too expensive and the donor of funds for the project owned a large portion of the quarry, so it was build with limestone but the name remained.