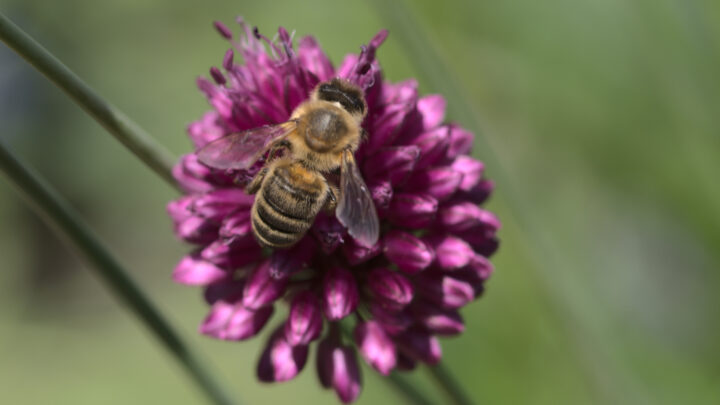 Have you ever wonder over the name busy bee? I was sitting next to the flowerbed in the garden and I could absolutely understand why it’s named that way.

I had my 105 mm macro lens on the camera and was trying to get a good shot of one of the buzzing fellows. I had the camera on a tripod, with the ball head loose. So I could get the nearby flowers into the frame rather fast, the lens was approximately in focus, so it could also focus correctly fast. I counted seconds, it took about 2-3 seconds from I spotted a bee until it was perfectly in focus. But most times it wasn’t fast enough, the buzzing fellow landed inspected the flower, sucked up nectar and was away again in less than 3 seconds. Luckily sometimes a bee moved a little more around on the flower, stayed in practically the same spot for 5 seconds, then I could get 1 or more shots of it. Most of the shots showed up to be blurred by motion because the bee actually moved faster – walking around the flower – than I had expected. But as you can see here I got some nice pictures of the busy fellows.

When the bees left the flower, they didn’t go far, just a few seconds flight to the next flower. As we are having several different species of flowers different kind of bees are attracted to our garden. To enjoy the sight of bees can be quite interesting and is easy to get to, just secure flowers instead of boring grass.