When you are in Mrauk-U you’ll have the opportunity to visit the Chin Villages. The most remarkable thing about the Chin villages is that until around 1972 women at the age of 16-17 were tattooed in the face. The tattoos are rather characteristic and as I understand the tattoos are unique for each village. What the purpose of the tattoos were our guide could not tell us, but he assured us that the women were happy that the government had banned the tattoos and that they were the last to be tattooed.

If you purchased a blanket produced by the women they would willingly pose for a photo.

The trip to the Chin villages takes all day. We left our hotel in the morning, and were driven 8-10 km south of Mrauk-U, here we changed to a long-tail boat which took us up-river for about 3 hours. The tour up stream is interesting in itself, as you get to see how the Burmese lives along the river and uses it for transport, fishing, washing etc.

The villages are remote and seems isolated. Electrical wiring is not seen in the streets (or rather paths) between the houses. But on several houses solar panels can be found, probably providing power for light or a radio. Our first impression was that the villages were isolated, but in one of the we saw that a narrow tracked rail-road ran behind the houses. 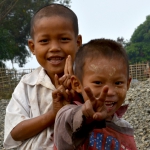