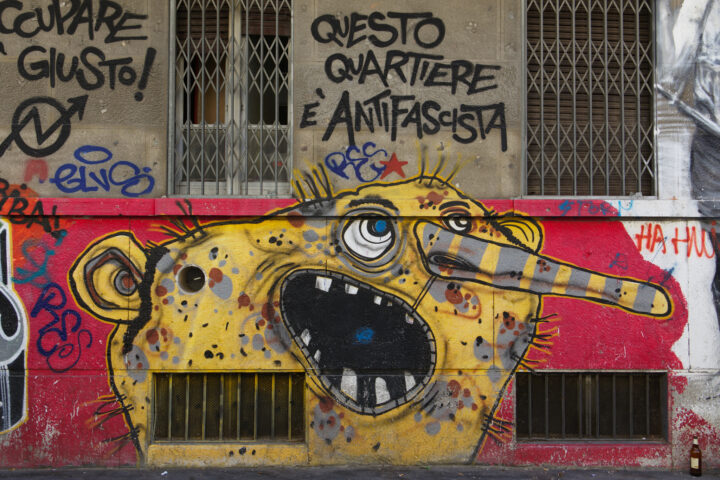 When you fly to northern Italy from Denmark Milan is the destination with the most flights and best prices, so as a Dane you are likely to start the journey in Milan. i did, and stayed in the city for a couple of days.

First day we went to the city center to look at the standard tourist places – like the Cathedral, Shooping center Galleria Vittorio Emanuele II. The next day we had had enough of tourists and tried to go other places than most tourists do. So we headed out to the vertical forest as the 2 high-rise buildings are called (Bosco Verticale in Italien), amazing how some trees and bushes can change the character of a building.

When you are around Bosco Verticale you are close the Isola quarter, take a stroll through the streets to enjoy the many pieces of street art found there.

La Triennale di Milano is the Milanese design museum, and if you are interested in industrial design it’s worth a visit. Among others they have a time line going from the end of WWII until the late 80’s, so to me it was a sort of walk along memory lane as I remember to have seen many of the objects in real use in the past.

Sforzesco Castle is found in the same park as La Triennale di Milano, the building in it self is amazing, and if you have the time and lust for it, you’ll find some historical museums within the castle.

The Genova gate is a quater in the south part of Milan, it is worth a visit due to the cosy canal. Parts of it is beautiful and you find several bars, restaurants and cafes along the shore. In the streets between the 2 canals you can enjoy several items of street art. Both some that must have been painted during the night and some painted in day light.

By the church  San Lorenzo M you can find a piece of street art commissioned by the church in 2013-14. It depicts the history of the most recent 1000 years.

You should also spend some time to stop by the installation against violence towards women. It’s found on the corner of Via Molino della Armi and Corso di Porta Ticinese.